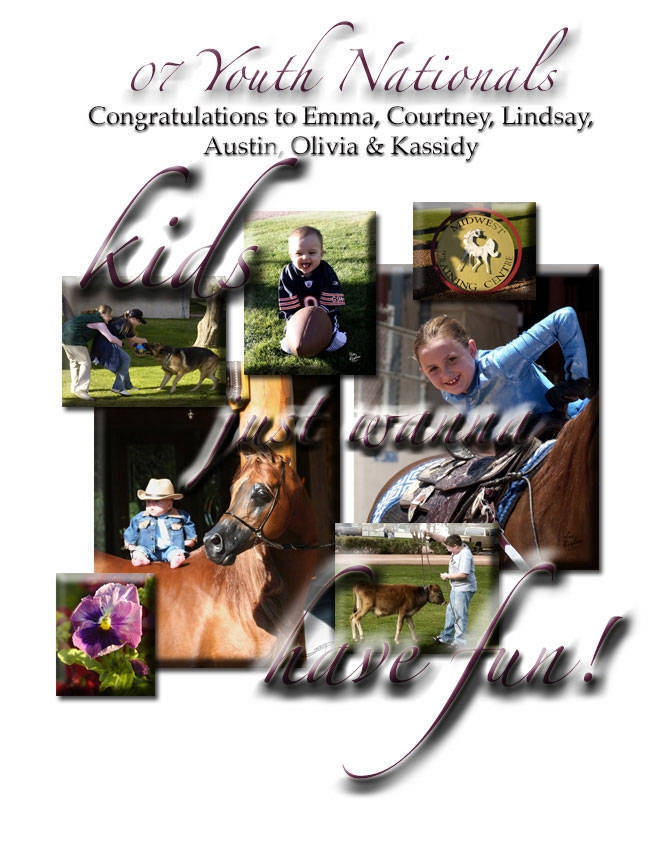 For Team Midwest, the Youth Nationals is a family affair and a reminiscence of a time not so long gone when camaraderie took precedence over competition, and the horse show experience was a little less complicated.

That’s not to say that our extended family doesn’t have fun at every event, it’s just that at Youth Nationals it seems as though everyone from every barn and every part of the Country gets together and shares the joy of it all in a way we don’t always take time to do at other big events. And so, in a way, we’re all kids again, and once more the horse show is a great gathering place for the denizens of this small town scattered all across the world––the community that surrounds the beautiful Arabian horse.

One rather hilarious and consistent condition that only slightly contradicts the above statement has to do with the great nerve attacks suffered by horse show parents and trainers of young participants. It’s truly a riot to watch moms and dads and trainers of all disciplines––who appear calm and cool when they’re competing themselves––scurrying around frantically while their kids and trainees relax and enjoy the sport that engages them, one and all.

The most nervous among the Team Midwest members were, of course, David and Terry Anne and the trainers who helped their girls in the performance classes, including: Carolyn McDonald Shino and Bubbles Hiller, who both helped with Emma’s Western horse, Braveheart. And, Natalie Jones, who helped Courtney with her Half Arabian Show Hack Gelding, Prince of Thieves.

Outside the essential show ring, part of the reason for the atmosphere of joy that pervades the Youth Nationals is the abundance of entertaining activities and light-hearted competitions that are interspersed with the competition.

This year, the Creator planned His own daily celebrations, punctuating each afternoon with a brilliant lightening storm. In the beginning, most of us were terrified, but before long we started looking forward to the spectacular Heavenly fireworks displays and seeking out the best places to view that part of the show.

Many of the humans among us also organized some terrific diversions. Walter Mishek of the Arabian Horse Times sponsored the “Arabian Idol” party––where young musical hopefuls (including Courtney and Emma Boggs) sang and performed in the Karaoke contest, and everyone enjoyed delectable treats. Notably, Walter threatened to take the stage, but in the end chickened out.

One afternoon there was a dog show in which participants and their pets dressed to the nines and strutted their stuff. Emma and Olivia Boggs, as Team America, competed against entrants such as “Elvis”, “California Dreamin” and the “Pixie Chicks”.

Other afternoons saw “The Pig Toss” in which the object was to hit a target with a little rubber piggy. From Team Midwest, Riyan Rivero’s son, Cole, came close. Austin, Cole and friends had air-soft wars several days and cruised the big Flea Market a couple times.

There was a terrific concert featuring Emerson Drive and one evening both David and Bob Boggs’ families, joined by their crews, celebrated at Chuckee Cheese. What a blast! Bob and his son Austin and Team Midwest trainer, Ricardo Rivero had a basketball shooting contest. Little Jake, the youngest member of the Boggs clan, reminded us all that he IS his father’s son––interested ONLY in horses––when he insisted on taking the horse-racing ride over and over again and showed us that he couldn’t have cared less about any other amusement. Emma, Courtney and Olivia, who were more eclectic in their choices of entertainment, pooled their winning tickets to “purchase” a game station.

For Riyan Rivero, the newest member of Team Midwest, the most moving aspect of her first Team event was the family atmosphere so lovingly shared by the Boggs clan. “I loved how everyone supported each other,” she says. It was so great to see our Team cheering on ALL of the kids––not merely Boggs family members. For example, in the halter classes we shouted for every one of the youngest Boggs generation kids (except Jake who hasn’t yet made his grand debut) right along with Brad and Holly Gallun’s daughter, two of Gary McDonald’s kids, Gil’s son, and Rick and Melanie Love’s son, just to name a few.

“It was also really a thrill to see some of the breed’s great mares in the show ring together. I laughed when I heard someone say during that class how incredible it was to see all these mares in the ring at the same time and how, if it were an open class, 80% of them would have been scratched for fear of competing against the others.

“Best of all for me was meeting new friends, enjoying old ones, sharing precious family time and feeling instantly at home with everyone, kids and parents alike. All in all, the show was a marvelous blessing, the perfect beginning for a hope-filled new adventure in life for myself, and for my children. Thank you David and Terry Anne!”