a new day has come. 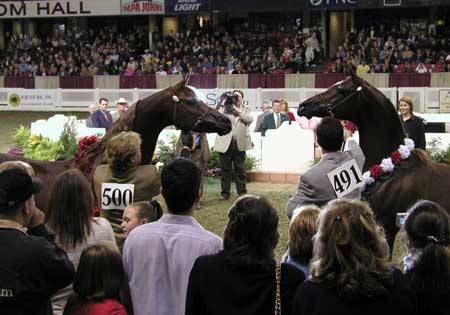 The 2004 US Arabian Nationals will be remembered as one of historical significance. Show ring records were both broken and newly created this year. “Team Midwest”, in their typical good humored fashion, along with hundreds of their guests, celebrated deep into the night on Saturday October 16th 2004 in Louisville, Kentucky, all enjoying the culmination of one of the greatest Arabian Nationals in history. 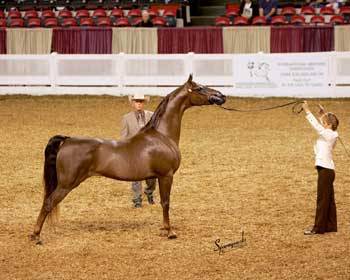 The celebration actually began days earlier when David Boggs entered the show ring with the Half Arabian Gelding, GOOD AS IT GETS owned by Don and Kim Shackelford. Befitting his name, this incredible gelding garnered for David, David’s first unanimous US National Championship in 5 years! “Goodie”,as his owner’s lovingly call him, has won a total of 13 National Championships in Half-Arabian Halter, making him the most winning Half-Arabian Halter horse in history!

Class after class it was as if David had never left the US show arena. Several exhibitors were even overheard commenting that it “Finally Felt like Nationals Again” to see David and the “Team Midwest” Clients showing their beautiful horses to the Championship Rose garlands. 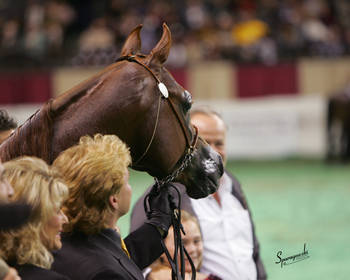 Throughout the show Midwest hospitality flowed like wine. A quick glance at the Midwest stall area revealed the carefully designed wooden beams high overhead twinkling with red white and blue lights. Delicate white linen softened the breezes around the stalls as music, plush sofas, pool tables and video games beckoned all to stop and visit for a while. Complimentary food and drink were an ever-present offering to the many guests as well.

As the last Saturday afternoon of the show drew near, tension filled the cold air. This would be the afternoon every one was waiting for, Magnum Psyche to enter the arena for the Senor Stallion class. 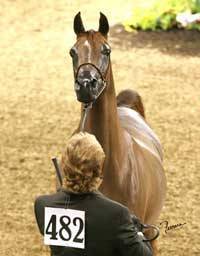 Magnum was carefully and very proudly led to the warm-up area by Midwest trainer, caretaker and longtime friend Gil Valdez. Cameras suddenly appeared in the gathering crowds surrounding Magnum as if Elvis himself had returned. Flashing bright blasts of admiring light shattered the darkness of the chilly Kentucky afternoon.

Truly, it was as if a Hollywood icon had suddenly appeared. Magnum, however, in true professional form, calmly took his place in the order of go in the entrance shoot. The excitement grew as his warm cooler was gently removed from his well-conditioned body. David, looking somewhat anxious, gently grasped Magnum’s lead after giving him a good luck hug and looking to the sky one last time for his fathers nod. These longtime friends were about to embark on a promise that they had made each other.a date with destiny that began some 5 years ago. 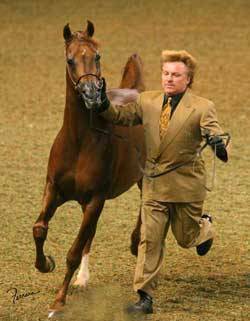 As Magnum and David entered Freedom Hall arena, it was as if time was indeed standing still. You could read the determination in David’s body, not thru David, but thru Magnum. It was amazing to watch. Magnum was not nervous for himself, but for David! You could see that Magnum felt every emotion that David felt. It was as if they were truly one! Magnum’s lips tensed in nervous apprehension for the final standup in front of the judges. David calmly placed his whip on the ground; there was no need for it. Magnum and he had done this hundreds of times before. Then, almost as suddenly as it appeared, the tenseness left Magnum’s lips as David took a breath and calm filled his body. David raised his arms, asking for Magnum to show, and Magnum stood tall, proud, in a perfect halter pose.

A quick look over the rail to Magnum’s owners, Fernando and Joaquin De Santibanes, confirmed the mirror of emotion shared by Magnum and David on their faces. Joy, admiration and the knowing that they were witness to a once in a lifetime emotional performance was evident. 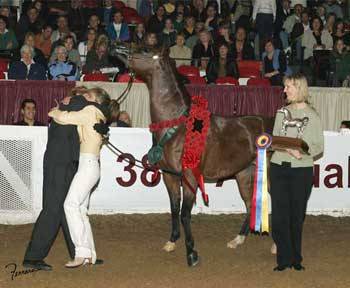 Magnum’s son Jaayd was presented in this same class with Sandro Pinha and it was as if one was watching a re-enactment of Magnum himself being shown just years before. Jaayd, exhibiting the same light of greatness, was shown for owners Lucky and Raegen Lurkin. The Midwest team rose to there feet as Jaayd was announced as United States Reserve National Champion stallion! At this moment it became a prayer that if Magnum would be named National Champion in this same class, this would become a unprecedented record first in Arabian Horse History for a father and son victory! Watching his son accept his garland Magnum surveyed the arena with calm dignity.

As the announcer’s voice broke the tension that could only be described as absolutely choking, Magnum Psyche was named the Unanimous National Champion Senior Stallion! 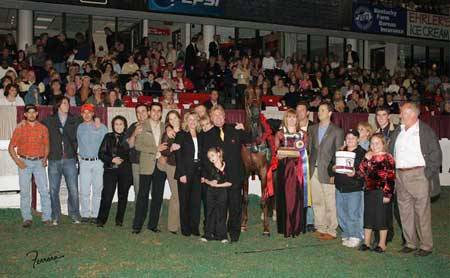 For a split instant, David’s knees buckled, and if not for his arms resting on Magnum’s strong back it seemed as if they would have given way, as such was the release of emotion! Gathering their strength together, Magnum and David ran to accept their roses! 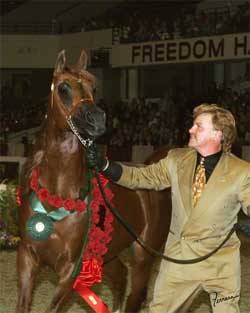 Friends and family of “Team Midwest” joyfully ran into the ring to join in the celebration of taking photos from this incredible win. Then, to the crowd’s delight, a new member of “Team Midwest” ran into the ring to congratulate Magnum! This little friend was a pet Raccoon who wore a Red Sweater with an “I Love Magnum” button pinned on it! Owned by friends, Victor & Lori Ricigliano, The crowd clapped and couldn’t believe their eyes when little “Remo the Raccoon” was held up to Magnum and he gently reached out his hand and stroked and petted Magnum’s Neck! It was almost as if to say. “Dear friend, you did well, you did well.” And so the celebration began!

Later that evening the celebrations continued with Magnum’s youngest son in his class *Magnum Chall HVP being named the National Champion Junior stallion. *Magnum Chall, also owned by Raegan and Lucky Lurkin resembled in every detail the strength and power that his sire had displayed only hours before! 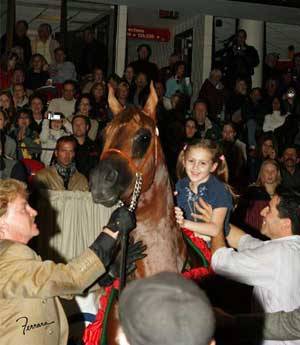 On that final night, it seemed as if the entire show was packed around the Midwest Station II stalls. The star-studded lineup of show horses had garnered a very impressive nine National Championships during the previous week of competition. The beautiful Rose Blankets were hung from the archways of the stalls and the National Championship trophies were proudly displayed openly on a rail for all to touch and enjoy. Equally impressive, and well evident, was the excellent care given to each Midwest horse and to every detail involved in creating a “Fairy tale” feel to the Midwest stalls. This sort of careful attention to detail is one of a group effort including the Boggs family, the caretakers, grooms, semi truck drivers, trainers and friends of Midwest.

On a raised stage specially built for the Saturday night music, live bands played deep into the night. Dancing, singing and good friends gathered for what was to become one of the greatest Nationals in Arabian horse history. 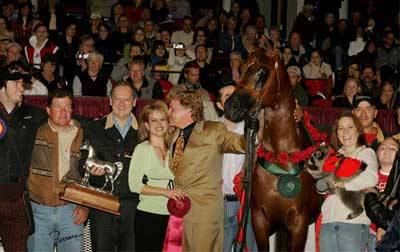 Indeed it was a time for celebration! David Boggs was back in the show arena, the incomparable Magnum Psyche showed to a Unanimous National Championship and friends gathered by the hundreds to enjoy the horse show! This journey, this group effort, is known as being a part of the family called “Team Midwest”.

As the show’s wins were tabulated it soon became apparent that Magnum Psyche was setting Arabian show records. Magnum became the Leading Sire of Halter Champions at the 2004 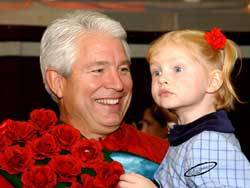 US Nationals as well as his offspring being awarded FOUR National Championships, FOUR

If ever a dream had been dreamt, it was never more apparent that….a new day had come. 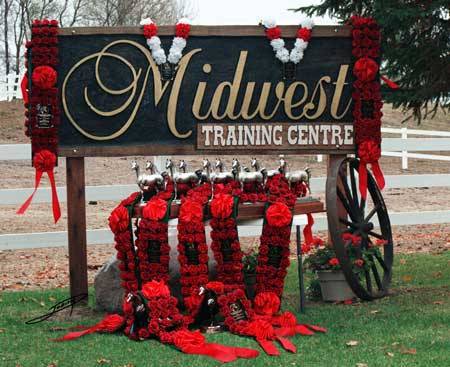 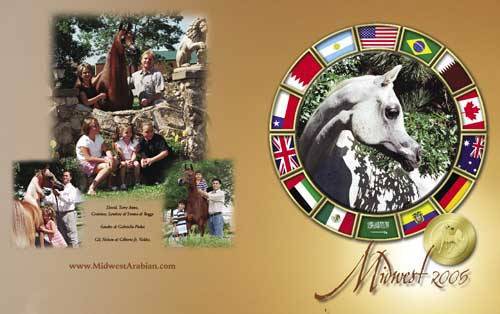 In addition Magnum Psyche was The Leading Sire of Halter Champions of the National Show, his offspring were awarded:

To be there………
with him, surrounded by all those beautiful horses,
the breeders , owners and trainers of Magnums children,
by horseman, friends, family and supporters
………was to be home.

My heartfelt Thank you ,
To AHA and to the staff of National Show chairman Lance Walters.To my wife Terry Anne and our daughters who have made these past years mean so much to me, To Sandro Pinha, Gil Valdez and Rinaldo Longuini and Team Midwest for caring for and preparing our show string as I could never imagine, And to Fernando de Santibanes , a great and wise man who gave me strength and taught me to realize that when your passionate about something…you never quit.

It was for me, the greatest show on earth.